This is the second of my tutorials created as part of my contribution to mentoring teams of school children in an IT challenge here in New Zealand – see earlier article for details of that.

These notes were prepared in answer to a question from a student “How do you make something happen when a sprite collides with a barrier”. The following describes one way you can detect when one sprite hits a barrier.

There are in fact two types of collision detection:

These notes describe the first case – the second one is really easy.

By the way, “collision detection” is fundamental to pretty much any computer game, and understanding the basics of it is really useful.

The first thing is to represent your barrier as one or more sprites. They don’t have to move, but making them a sprite is what tells the program that it is something that might be collided with.

A good way to make a barrier sprite is to use an image to paint the sprite with. In my example, I found a picture of bricks on the internet and uploaded it to AppInventor. 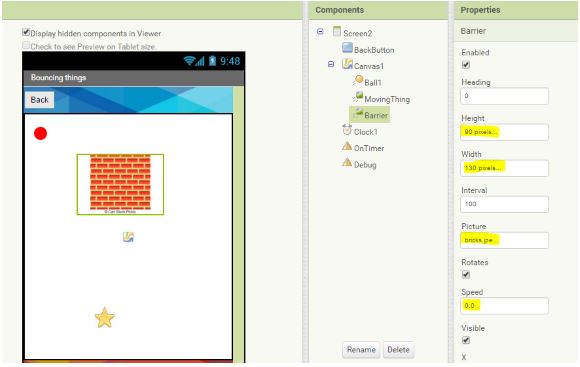 Look at the highlighted values in the properties for Barrier:

The star shape (MovingThing) was set by loading in another image of a star. This is just an example for this tutorial. Its speed and heading are set so that it moves upwards towards the barrier. What we want to do next is respond when the star hits the bricks.

The code block to implement this logic is simply:

It is pretty self self explanatory. The key thing is the “when MovingThing.CollidedWith” block, which gets activated whenever the MovingThing collides with some other sprite in the scene.

On responding to this event, we check that the MovingThing collided with the Barrier object, and not another object. If so, we set its shape to be a different image (called blue circle), and also stop it moving.

If there was more than one object to possibly collide with, then we would just add more if..then blocks checking against all the possibilities,

When you run in the emulator, you will see this to start with:

And when the star hits the wall:

It turns into a blue circle.

Setting the shape to a blue circle and its speed to zero are simply what I chose for demonstration. The actual action that happens when MovingThing has hit Barrier could be anything, and not do either of these things.