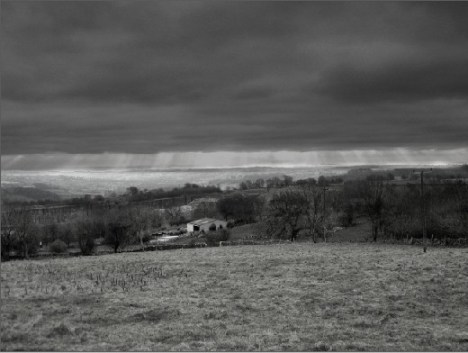 This image came out of nothing, and I’m not sure if it is cheating or not. With a pretty poor original photo (see below) I changed the colours, messed with the contrast,  blended different parts together and airbrushed out some bits that were spoiling the shot. Which got me to thinking: at what point does photo enhancement fake things too much in an attempt make up for poor camera technique?

Here I describe how I put this image together from an original low quality shot. If nothing else it may help people who want to do similar things using their photo editor. I’ll leave it to the reader to judge whether I should have just taken a better picture to start with.

After Christmas I was out walking in Derbyshire with the family. I only had my Digital Ixus 500 (aka Powershot S500) point-and-shoot compact digital with me. It is several years old now, has a modest 5 megapixel sensor, and has been battered around somewhat. So while not brilliant by today’s standards, it is solid and fits into the pocket nicely and I have taken a number of good photos with it. It only has JPEG options – no RAW, uncompressed TIF etc, so the quality you get out is very much dictated by the on-camera image compression.

While walking I was rather struck by the shafts of light streaming down from the clouds in the distance. “Mmmm, great God rays…”, I thought, and took this picture. 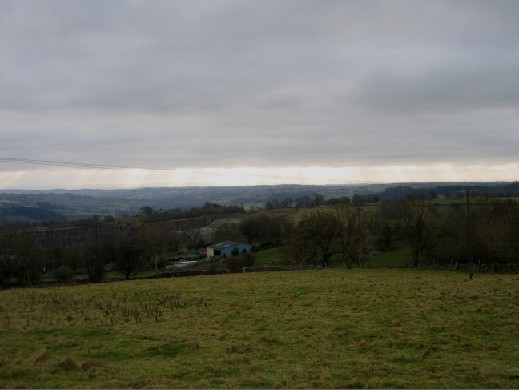 The original out-of-the-camera picture as a JPEG

The metering on the camera was obviously struggling a bit here – the light shafts were pretty bright but the trees and building in the mid-ground really darken up and lose detail. If I had used my SLR, I could have really thought about the best place to meter from, and got a much better original. But that day I did not have the choice. When I uploaded the image onto my computer, I also noticed the telephone wires impinging on the clouds. Since the death of my PC with my favourite Photoshop Elements 6 software on it, my challenge was to use an old version of Photoshop CS I had on an old laptop to see what I could recover. While I had done this kind of thing occasionally using RAW images from my DSLR, I was not massively confident of getting decent results given the image was already a JPEG.

One approach you can take is to use tools like dodge & burn, clone stamping, contrast and colour adjustments on the original. For example I could use a cloning brush to get rid of the wires, then boost the brightness of just the bottom half, and bring it down for the top half. Finally, if I wanted a black and while final result I would either reduce the saturation to zero or use a conversion filter.  But each time you do an operation you lose some of the original information – and once its gone its gone. The practical consequence is you have to get each stage exactly right before moving onto the next. The opportunity for fine tuning is limited. 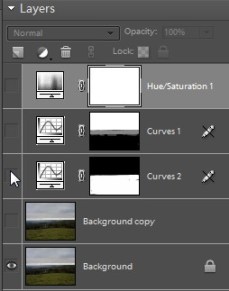 Layers used in this exercise

This is where layers come in. You can work on each stage independently, and then go back and forth making adjustments to the picture as a whole, without losing any original information at all. While I did this in Photoshop CS1, you could equally well do the same thing using the free open-source GIMP tool. If you are on a budget, then I would recommend having a look at GIMP.

The first step was to make a copy of the background (the original image) so I could wipe out the wires without destroying the original. While I could have just repaired the original image, I’m such a klutz on the mouse sometimes that I clone-stamp the wrong bits, and Undo will only get you so far. But the main reason for copying the background – and then freezing it against change – is that it makes it easy to refer back to the original while making other changes. 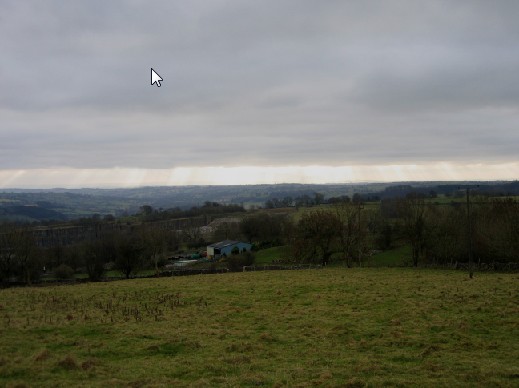 Image after telephone wires were airbrushed out

The next job was to get the foreground looking a bit brighter, and pick out the details of the mid-ground. Again, to preserve the original, I just created an “adjustment-layer” (in PS-speak). There are a few tools to choose from, but I used the Curves adjuster for fine control. The problem is that increasing the brightness on the image as a whole wipes out the cloud detail, and completely destroys the light-shafts. A feature of adjustment layers, however, is that you can mask the effects to just particular areas. So all I did was to paint a mask over the top half – fading out around the horizon. 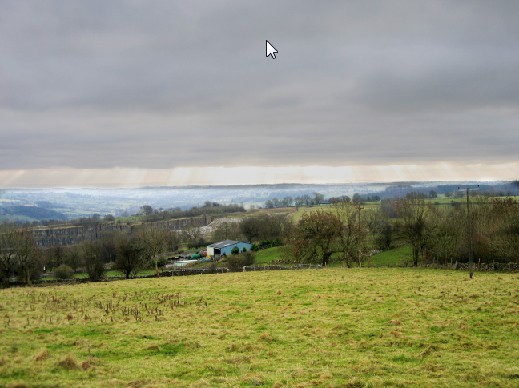 Foreground brightened up and contrast fixed

To get the clouds looking a bit more dramatic, and also enhance the light shafts a bit, I created another Curves adjustment layer, copied the mask from the previous layer, and inverted it so it affects the top half. 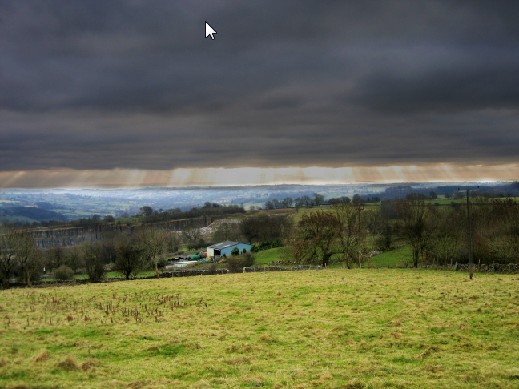 I could have left things there – it’s quite a dramatic image with a lot of colour. But just for the heck of it I thought I would see what it looks like with less colour saturation. Again, the non-destructive way was to use an adjustment layer where I took saturation down to zero to get rid of all colour. The final result is the top image of this post.

So is this a cheat? The original naked-eye image was rather spectacular but I would have to admit that the last full colour post-processed image probably exaggerates things a bit. I think that may be why the final black and white works better. Although looking at it again now I think there is room for further detailed adjustment to really pick out the trees on the right.

If nothing else, however, I think it is a legitimate exercise to try and inject some of the drama and vibrancy that you see with the naked eye and which cannot be picked up easily due to limitations of cameras (and their users!). I suppose the only other choice is to throw away the original image and pretend you never took it. Given the choice between this and at least attempting to capture the something that made you take the photo in the first place, enhancement can be justified.

One thought on “Something from nothing”