Last year I became involved in a schools IT challenge here in Wellington as a mentor for a pilot program run jointly by the Royal Society and the New Zealand Institute of IT Professionals. The aim was to challenge teams of year 9 and 10 pupils from a few schools in Wellington to create an app. It was to be a full-cycle development, taking in initial design, coding, testing, and finally demonstrations in front of a Dragons Den style panel who chose the eventual winner.

Around 40 teams took part, each of up to four pupils, with the brief to create a school time tabling app. I was one of several IT professionals from various companies in Wellington who volunteered to be mentors to one or more teams. In my case it was two from St Mary’s College. It entailed advising on all aspects of the project, and providing technical input where appropriate – and without doing the work for them.

The challenge took place over several weeks. Mentors visited the classes as often as needed, and were also available to provide support via email. Personally I found the whole experience very rewarding, and it was great to have a chance to introduce the next generation to various aspects of IT as a profession.  The programme is rolling out on a more nationwide scale over the coming years, and I would encourage anyone to put their hands up as mentors.

The prize on offer for the winners was donated by my employer, Datacom, to provide resources to develop the winning idea into a shipping application. The call went out around the company asking for volunteers to join a small engineering team which I ended up leading.
The winning pupils coincidentally came from the same school where I was mentoring, although they were being guided by a different mentor (also a Datacom employee), and called themselves the Pastel Programmers.

An initial launch and brainstorming workshop was held at the end of September with the three St Mary’s pupils. This set down the core design principles and ideas behind what became a school timetabling app called Pastel Planner. The team quickly created a mockup using Flinto, and shortly afterwards the shell of the app was created on both Android and iOS platforms. Through October and November the app evolved with continuous feedback from weekly workshops with the Pastel Programmers. They contributed ideas, artwork and assets, and also took part in some pair programming with the Datacom developers – something they said was perhaps the highlight of the whole experience.

Pastel Planner lets a student manage their timetable, subjects, and homework in one central location. Camera integration makes is easy to grab homework details from the whiteboard. 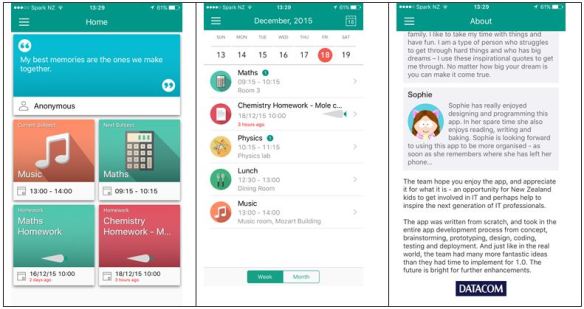 By the end of the exercise we had created a functional and useful app, which also incorporated a few fun ideas. But more importantly, the students were exposed to and involved with the full cycle of product development, and will have picked up skills and knowledge that they can apply to any team project.

The app is available free on both the  Apple Appstore and Google Play at the following URL’s: